“Our analysis is that if illegal fishing continues at the current rate on Lakes Edward and Albert we could end up with two dead lakes,” said Ms. Daisy Olyel Aciro, the Assistant Commissioner for Enforcement in the Directorate of Fisheries Resources of Uganda.
“Last year, when we analyzed results from the Catch Assessment Survey done by LEAF II and the Governments of the D.R Congo and Uganda in 2019, the huge quantity of catch recorded; to a lay person looked impressive but to us as fisheries experts, was alarming. It showed that our fishermen were taking everything from the Lakes; immature fish that had little commercial value to the non-consumable by-catch that should be feed for the big fish, that they were using illegal gears and even fishing in breeding areas,” added Ms. Olyel. She spoke at Kasenyi, D.R Congo at the kickoff meeting for the first ever simultaneous joint patrol on Lakes Edward and Albert.

On his part Hon. Guerchole Dramani, the Provincial Minister for Agriculture, Fisheries and Livestock for Ituri Province of the D.R Congo, explained that the joint patrols are a follow-up to the State visit to Uganda in November 2019 by the President of the D.R Congo H.E Felix Tsheshekedi. He said that during the State visit, a Joint Technical Committee was formed to strengthen bilateral relations and a key component of this was cooperation in management of shared waters. He added that the State visit was itself a follow-up to the signing of the Bilateral Fisheries Agreement in Munyonyo, Uganda in October 2018.

Hon. Dr. Fatuma Hassan Sheilla, the Provincial Minister of Agriculture, Fisheries, Livestock and Rural Development for North Kivu Province of the DRC, speaking at Ishasha during the joint operation said, “Together we have agreed to completely stop harvesting of immature fish, use of illegal nets and use of fishing lights at night and have also agreed to exchange illegal fishers and destroy all illegal fishing gears on the spot.” She added that D.R. Congo will go further to confiscate illegal gears found in shops.

Hon. Dr. Fatuma’s sentiments were echoed by the Head of the Uganda delegation, Mr. Robert Mugimba, the First Secretary of the Ministry of Foreign Affairs saying, “A major weakness of previous enforcement operations on the lakes was that the exercises were uncoordinated and each country operated separately, which allowed fishers with illegal gears from one country to cross over to the other country to escape the operation.”
This joint patrol exercise was facilitated by the Multinational Lakes Edward and Albert Fisheries and Water Resources Management (LEAF II), a project under NELSAP/NBI that is funded by the African Development Bank (AfDB) and the Global Environment Facility (GEF) and collaboratively implemented by the Governments of D.R Congo and Uganda. The two-week joint operation was conducted in March 2021 on both Lakes. On the D.R Congo side, the operation was led by Admiral Egide Ngoy, who oversees security in the Eastern part of the country together with Director Rodrigue Mugaruka Katembo, ICCN Deputy Director in charge of Law Enforcement for the Virunga National Park. Operations on the Uganda side was under direct supervision of the UPDF Marines Brigade Commander, Brigadier Michael Nyarwa. 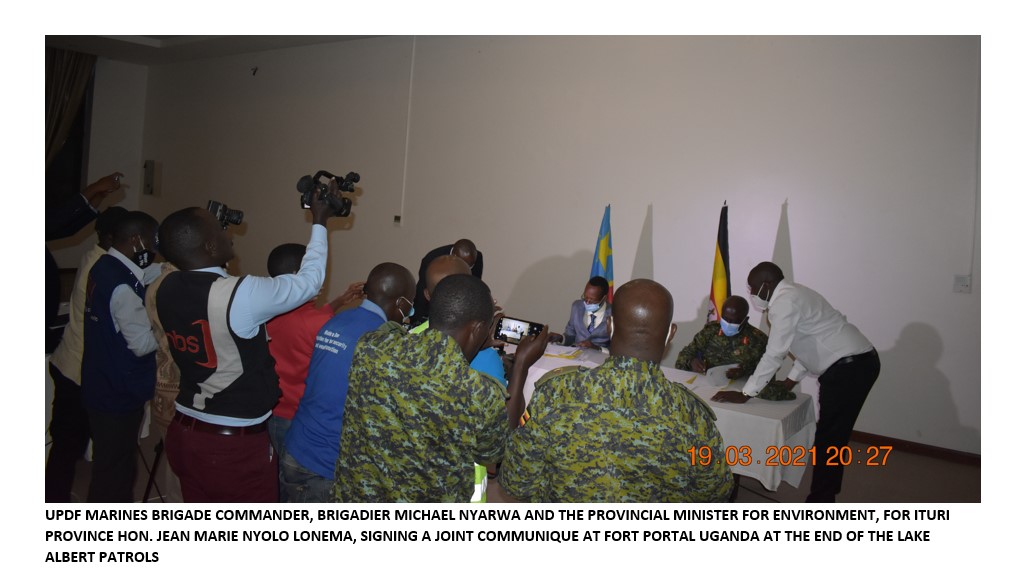 Speaking at the close of the exercise, the UPDF Marines Brigade Commander, Brigadier Michael Nyarwa said, “The joint exercise gave us confidence and trust with our partners from the other side (D.R.C) and showed that we can to work together.” Brig. Nyarwa added that the two countries were working to harmonize several things specifically, the fishing holiday which only D.R.C has in force, so that even Uganda can put into effect the same and synchronize them, so when that holiday is over, fish catch will be high. “The other area we are reading from the same script is on the total ban of the non-biodegradable plastic mono-filaments, which are very dangerous to fish and the ecosystem,” Brig. Nyarwa added. The Brigadier was accompanied by Hon. Jean Marie Nyolo Lonema, Provincial Minister for Environment, for Ituri Province of the D.R Congo. Hon. Jean Marie affirmed that his country is committed to future joint operations guided by the Standard Operating Procedures (SOPs) for joint patrols on the two lakes that was developed jointly by the two countries.