Cage Aquaculture on Lake Albert, a ray of hope for a group of Artisanal Fishers as they prepare to harvest 36,000 fish

“Whenever you leave your home to go into the lake fishing, the outcome is uncertain; – you may come back with fish or without fish, lose your net due to bad weather, drown in the water, or be attacked by pirates,” says Moses Munyomo, an artisanal fisherman for fifteen years. “With these fish cages however, most things seem assured; you know where your fish are and their exact number, and if you feed and take care of them well, you will get a certain quantity of fish and make money,” Moses adds. 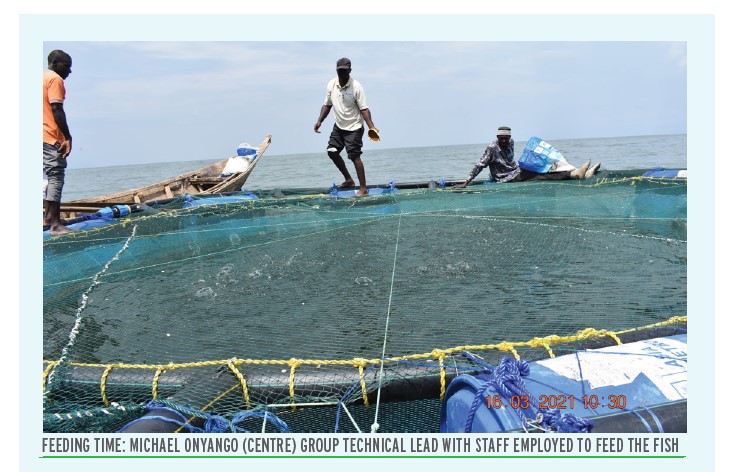 Moses is a member of Bafa (Buhuka Albert Fishers Association), one of the three fisher groups involved in cage aquaculture on Lake Albert. The groups presently own three fish cages with a total of 36,000 tilapia (Oreochromis niloticus). The three groups started as saving and lending groups for fishers in the remote fishing village of Kiina in Buhuka area, Kikuube District on the western part of Uganda. The groups began cage aquaculture in 2020, with support from the Multinational Lakes Edward and Albert Integrated Fisheries and Water Resources (LEAF II) project of NELSAP/NBI that is funded by the African Development Bank (AfDB) and the Global Environment Facility (GEF) and implemented in collaboration with the Governments of the D.R Congo and Uganda. As of mid-March 2021, fish from three cages owned by the groups were 3.5 months old, each weighing close to 100 grams. Each of the three groups hope to harvest a minimum of 3-4 tons of fish per cage and make a minimum of 15 million UGX (USD, 4,200) per cage. Bafa group has so far spent 4 million UGX (USD 1,100) and expect to spend another 2.6 million UGX (USD 712) on feeding the fish for the next three and half months. That means, by the time fish matures they will have spent 6.6 million UGX (USD 1,800).

“We have a goal of installing two additional cages in the next cycle after we complete this pilot phase where we are receiving 50% support,” says Mwongezi Vitus, a Parish Chief and fisherman. Vitus is one of the leaders of Bafa group. “After we sell this lot, we will sit as a group, calculate how much we shall have gotten from the fish and add to the savings from members and re-invest in the same venture,” Vitus added.

“Fishing and cage farming can go hand-in-hand, because getting returns from cage farming takes a bit long (7-8 months), but with my fishing, if I get one big mbuta (Nile Perch) and sell it, I can get quick income and even support our cages,” explains Mr. Joseph Abeka and says that is why they have not abandoned artisanal fishing. For the past 22 years, Joseph specialized in catching big fish, specifically Nile Perch (mbuta), but of late he has not been fishing much. He explains that the number of big fish has reduced greatly in the lake due to illegal fishing practices. For now, Joseph is focused on the cage aquaculture project being one of the people trained in cage installation, management, and fish feeding.

Mr. Richard Rugadya, the National Fisheries Officer for LEAF II project in Uganda, says that through this pilot support, the project wanted to demonstrate how organized groups around the two lakes can fabricate and install fish cages, acquire fingerlings, manage the fish through proper feeding and care up to harvest and possibly make a profit.

“It is difficult for cage aquaculture to be an alternative livelihood to individual artisanal fishers due to high maintenance costs and intensive management requirements. That is why we gave the cages to groups; since they can pool resources,” Mr. Rugadya explains.
How the Group Manage the Fish Project

The group has employed four personnel: two as security guards to protect the cages day and night and another two to feed the fish. The fish are fed three times a day. Five members of the group underwent a two-week Training of Trainers Course on installation of cages, feeding, replacing nets as fish grow, monitoring health of fish and general management of fish cages. The groups have been receiving capacity building and supervisory visits by the LEAF II Project, the local District Fisheries Officer and sub-county Fisheries Officer who visit the groups at least once a week to oversee their progress. Within a month, the project will hand over the cages to the groups to fully manage going forward.
“We are very ready for the handover of the cages since we have enough feed in stock that will take care of our fish until they are ready for sale,” says Mwongezi Vitus.

Five members of Bafa who underwent training, say that they have acquired knowhow to fabricate and fully install their own fish cages into the lake, put in fingerlings and feed them for their entire life cycle.
In 2019 LEAF II project conducted a research on the potential of Cage Aquaculture on the two trans boundary Lakes Edward and Albert. The research informed the current pilot cage aquaculture projects, revealing among others, the suitable areas for aquaculture projects and their carrying capacity.