Construction at the 80 MW Regional Rusumo Falls Hydroelectric Project shared between Burundi, Rwanda and Tanzania and managed by NELSAP-CU, has entered the final phase with overall completion rate of 78 %. “As of 31st March 2021, construction of the dam and spillway were at 92% and were expected to complete in June 2021, the power intake was at 96%, the headrace tail was at 70%, with the two expected to be complete by November this year, while the powerhouse structure was 83% complete,” said Mr. Andy Maro Tola, the Acting Regional Coordinator of NELSAP-CU, in his briefing note to the Rusumo Power Company Limited RPCL. 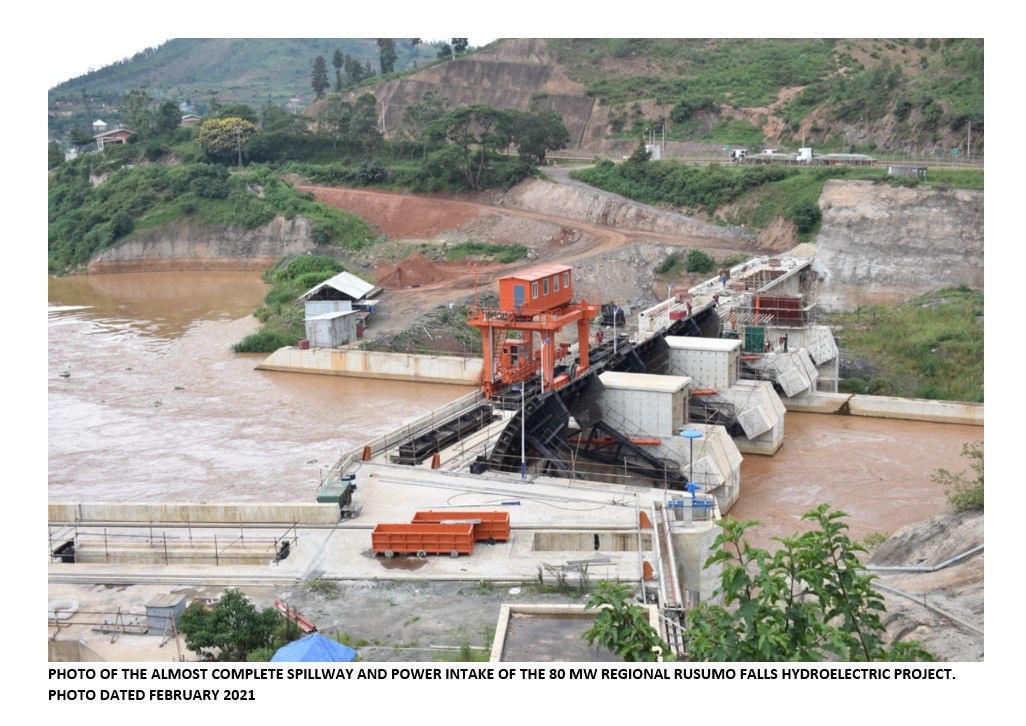 The NELSAP-CU Acting Regional Coordinator further stated that 97% of equipment for the electromechanical works were already delivered, while the switchyard and powerhouse installations were in progress. He added that the Service Bay overhead travelling crane (OTC) had been installed and commissioned for generator assembling and future servicing needs. “Focus has been on among others: the powerhouse construction, specifically on the service bay overhead travelling crane, which is functional and will be pivotal during assembling of generators, turbines, turbine embedded parts, downstream wall, and powerhouse super structures. Furthermore, there is a 220 ton crane installed that is helping to assemble the generator units 1, 2 and 3 and the pen stocks. The crane will support the backfilling of the upstream side of the powerhouse, which is prerequisite for installation of electrical equipment,” Mr. Andy Tola added.

Under NELSAP-CU, the three beneficiary countries, Burundi, Rwanda, and Tanzania created Rusumo Power Company Limited (RPCL), a Special Purpose Vehicle (SPV) for the project. The three countries mandated NELSAP-CU with the responsibility of overall implementation during the preparation and construction phase. The Regional Rusumo Falls Hydroelectric Project (RRFHP) is implemented on the Kagera River, 25km downstream of the Burundi, Rwanda, and Tanzania common border. The project is funded by the World Bank at about USD 340 million. The associated transmission lines connecting each of the three country’s Electric Grid to the Rusumo project switchyard are funded by the African Development Bank (AfDB) for USD 128 million while the respective implementation of the transmission lines are being coordinated by country specific utilities.

Upon completion, this project will bring an additional 80 megawatts of renewable, clean, relatively lowcost power to the national grids of Burundi, Rwanda, and Tanzania. The additional power will benefit an estimated 1,146,000 people in the three countries and an estimated increase in electricity access rates of: 5.4% (520,000 people) in Burundi, 4% (467,000) in Rwanda, and 0.34% (159,000) in Tanzania