The Regional Military Administrators in charge of Benni and Rutshuru Territories of Eastern D.R Congo on 9th and 11th August respectively presided over the handing over of completed and fully functional cold rooms and ice making machines at the modern integrated fish landing sites of Kyavinyonge (in Benni Territory) and Vitshumbi (in Rutshuru Territory). Each cold room has capacity of 40 cubic meters while the ice block and ice chips machines can make up to one ton of ice per day. When used for packaging fish, the ice can keep fish fresh in transit for up to 12 hours
ensuring that traders supply fresh fish to far away towns of Butembo, Benni, Kiwanja and even Goma and still get the best prices. 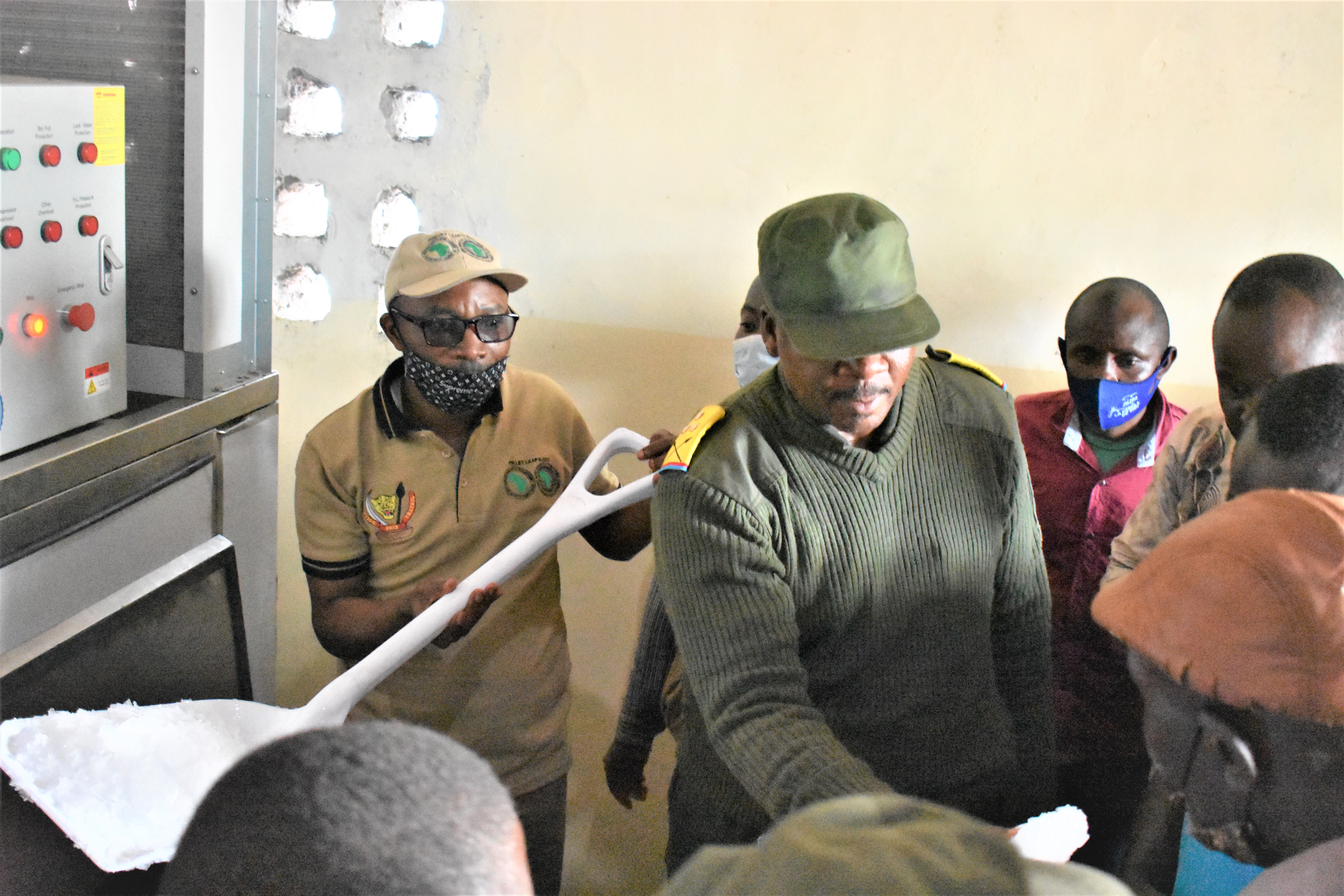 Each of the two landing sites has a cold room, an ice block making machine, a fish market, a fish store, an unloading shed, offices for co-management team-one for the Fisheries Officers and another for the Marines and a hygienic fish salting and drying area.

“I am extremely impressed with these fish handling facilities and I am giving an order today, that any fisher caught handling fish in the sand and bushes outside while we have a proper modern landing site here, will be fined up to 15,000 CDF (7.5 USD)” said Colonel Ehuta Omeonga the Military Administrator in charge of Benni Territory, while handing over the facilities. Colonel Ehuta directed local authorities to implement the directive with immediate effect. A similar directive was issued by the Military Administrator in charge of Rutshuru Territory, Colonnel Bakole Nyengele Luc, as he also handed over the Vitshumbi Landing Site.

Speaking after the handing over, the Secretary General of Fishers Committees of Lake Edward (FECOPEILE) Mr. Kambasu Katsuva Mukura Josué said, “As a fellow fisherman, I am very pleased with the cold rooms and ice making machines because previously whenever the fish catch on the lake rose, its prices would tumble due to ‘panic selling,’ as a result of lack of storage, but now fishers and traders can store unsold fish in the cold rooms until they get better prices.” “The ice-chips and ice blocks will ensure fish arrives in the market fresh, and will fetch higher prices since demand for fresh fish is higher than for smoked, dried or deep-fried fish,” Mr. Kambasu added.

The Military Administrators also presided over public election of committee members to be in-charge of the day to day running of the facilities on behalf of the communities. The sites are currently under a user-acceptability test before final remedial repairs are done prior to their definitive hand over. Two similar fish infrastructures have been constructed on Lake Albert, in Tchomya and Mahagi port landing sites. 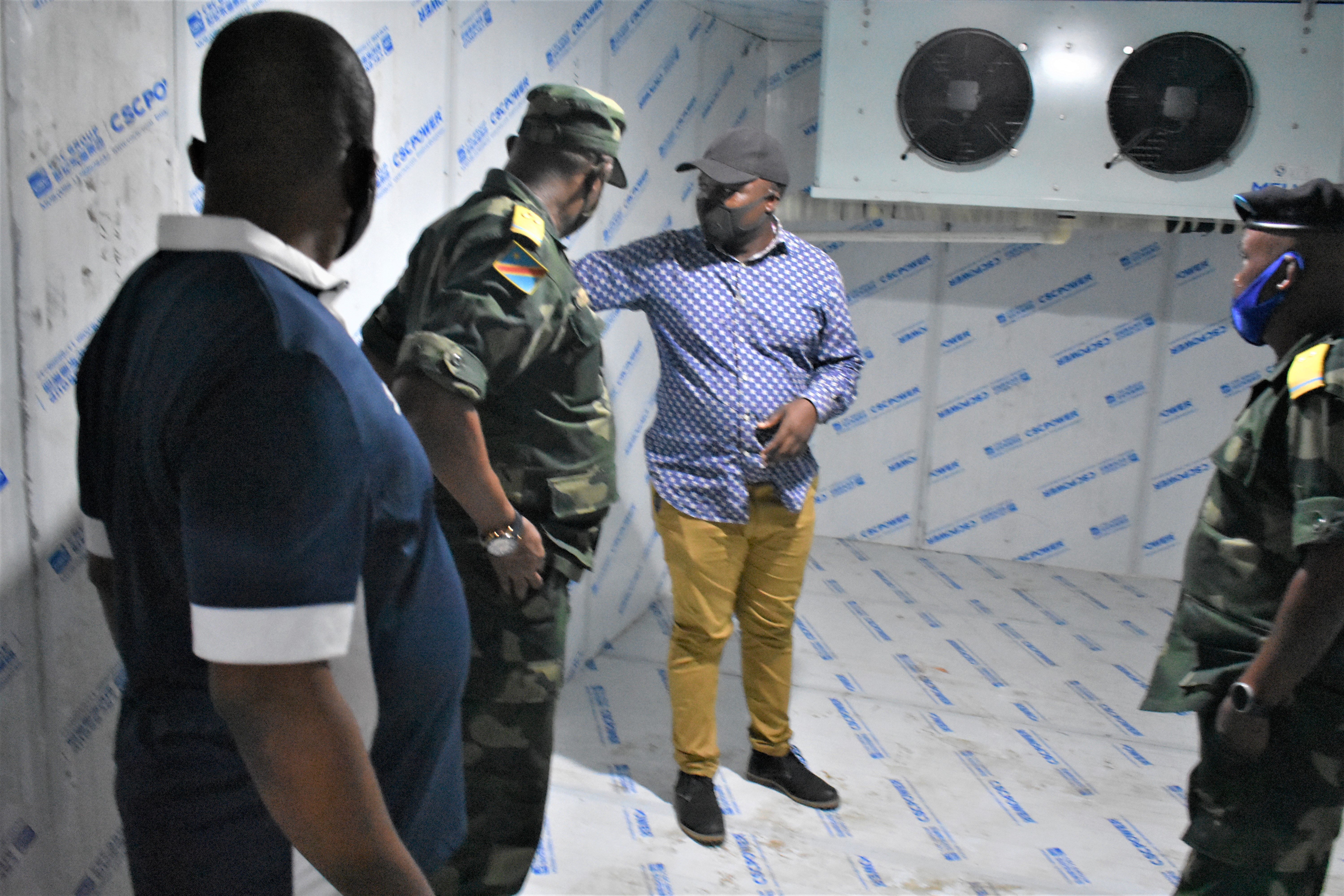 The sites were constructed through the LEAF II Project, Governments of D.R Congo, Uganda and NELSAP/NBI, with financing from the African Development Bank (AfDB) and the Global Environment Facility (GEF). Nine landing sites have been constructed around Lakes Edward and Albert in both D.R Congo and Uganda. At Kyavinyonge Landing site, the Military Administrator of Benni Territory also handed over a renovated 400-people capacity Meeting Hall and a three bedroom Guest House that were renovated by the D.R Congo LEAF II team. “This meeting hall and guest house will be available for hire and will be managed by the elected management committee and the Virunga Fisheries Cooperative, COPEVI respectively,” Mr. Joseph Masirika Matunguru, the National LEAF II Coordinator for D.R Congo said.
Editor’s Note: With Presidential and Parliamentary approval, since May 6th 2021, Provincial Military Governors temporarily replaced Provincial Government and elected representatives in North Kivu and Ituri Provinces in order to manage the security situation in the two provinces.